Keeling Company started in 1965 serving the Agricultural industry, but we’ve grown over the last 50 years to service irrigation needs across the board. From tree farms to fountains, chicken farms to golf courses, our aim is to partner with our customers and supply them with all the products and knowledge they need to do the job right the first time no matter what it is. Residential or commercial sprinkler system? Call us. Need a pump? Call us. Need outdoor lighting? Call us. Need drainage pipe? Call us. Need to aerate a pond? You know what to do.

In 1953, Joe Keeling was a traveling salesman covering all of Arkansas for Lewis Diesel Engine Company in North Little Rock, Arkansas. They were a Detroit Diesel Engine distributor who sold power units for everything, from running sawmills to re-powering trucks. During the years 1953-1955, there was a serious drought in Arkansas. As an avenue to sell more engines, Joe and the North Little Rock branch of Lewis Diesel Engine began to furnish engine and pump combinations to an agricultural market desperate for water and interested in a new irrigational method, which used aluminum pipe and sprinklers. Late in ’63 and ’64 Lewis Diesel Engine Company changed ownership and was sold to RCH Distributing of Memphis, Tennessee.

In 1965, RCH decided to sell its North Little Rock store. As part of a deal struck with RCH, Joe Keeling received a security safe and a 1963 Chevrolet two-ton truck. With that and help from his wife Helen, Keeling Company was founded. The first location was a converted tomato shed in Little Rock located where the Little Rock Airport now meets Roosevelt Road. We were there until 1968 when we purchased our current main branch and corporate headquarters. Our two initial employees besides Joe and Helen Keeling were John Schneider and Billie James. Both John and Billie have since retired from their careers with Keeling Company.

We began as a distributor for the agricultural market, as irrigation was primarily used in agricultural settings. However, in 1967, Keeling Company demonstrated serious growth in both service and diversity as Joe Keeling and Ed Shoemaker furnished one of the first 18-hole golf course irrigation systems in Hot Springs, AR at Belvedere Country Club. Since then and with the growing need for irrigation systems, we’ve grown to include residential, commercial, and recreational markets with our agricultural roots.

We are very proud to own all of our branches—currently 30! Ownership says to our employees and customers: we are here to stay through good times or bad—not just until the lease expires. We are very proud of our loyal, enthusiastic, and knowledgeable employees who work with us. One of the cornerstones of Keeling Company’s philosophy is the customer service. A business doesn’t work without customers and we are very proud of our diverse customer base, many with whom we have enjoyed doing business since Keeling Company began. 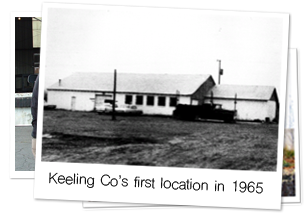